I’ve heard about bird watching before and I really wanted to try it. I was glad when we were given a chance to do it in class. Through the discussions, I discovered that there is a large variety of birds flying around UP. I was surprised since I haven’t noticed the different kinds of birds which even reach up to fifty-six, in UP before.
The experience was really fun. I enjoyed searching for and taking pictures of the birds. I realized that I was not observant enough since this was the only time that I really noticed the appearance of each bird. I also learned to appreciate nature through listening to the sounds of the birds and distinguishing the different kinds of chirps and appearances that they have. Being quiet was also something we needed to do in order to see the birds. I also learned about the Random Walk Technique and that the best time to observe the birds is early in the morning. These may have been the factors why I haven’t noticed other kinds of birds before, aside from the Maya.
I enjoyed roaming around, just appreciating the nature and listening to the chirps of the birds in the hope to actually see them. However, it was really difficult to see them close-up because they were always positioned high above the trees. They also fly away even in the slightest sound that we make. It was even harder to take a picture of them since the quality of my camera is not that good and they were too far away. Nevertheless, I really enjoyed counting and recognizing the birds that we encounter. We also had a hard time naming the birds that we see since we do not memorize the different kinds of birds. We only described them through physical appearance such as the length of the wings, size and color. We were able to encounter some birds that were discussed before going out into the field, such as the Fan Tail. The kind of bird we had the most encounters with was the Maya. We were able to see about thirteen of them and we were always able to see them closely. The other birds were very sensitive and they did not come down from the trees.
These were some of the pictures that I took during the activity. 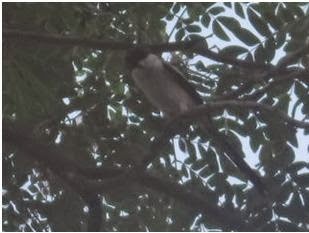 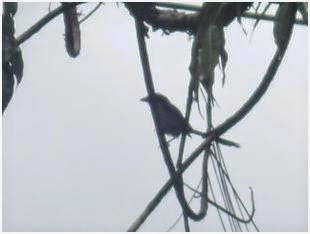 
The diversity of the birds reflects the biodiversity in nature. It shows the unique characteristics that each creature possesses. These balance nature. It also shows the beauty in our surroundings that we sometimes fail to notice because of being too preoccupied with so many other things. Just observing the nature can serve as a therapy to the stress that we experience daily.
Posted by Unknown at 5/11/2014 09:21:00 AM