ABSTRACT - If a person wants to know about a particular scientist in a specific field, he/she can just go to internet search engines automatically, that person will be flooded with results from all over the globe with names of scientists from different nationalities appearing on his/her computer screen.  Unfortunately, very few if not none of the scientists will be from our own country, the Philippines.  This is the main purpose of all the final papers that the STS X2 class will be required to submit.  It is important to know that Filipinos are also capable of scientific feats and this paper will focus on one Filipino scientist and discuss how he started as a scientist and his contributions to his field and the community.

PERSONAL LIFE
Dr. Gavino Cajulao Trono Jr. is a marine biologist, known as the “Father of Kappaphycus farming” (Aquaculture Department Development Communication Section, Dr. Trono is The New National Scientist - SEAFDEC Philippines, N.D.), an Academician of the National Academy of Science and Technology (NAST) Philippines, and a National Scientist. “He served as technical consultant on aquaculture and seaweed research and development of the Food and Agriculture Organization (FAO) of the United Nations and as active member of the Commission on Ecology, International Union for the Conservation of Nature and Natural Resources (IUCN)” (N.A., NAST Philippines, N.D.). He is also a Professor Emeritus of Marine Science in University of the Philippines Diliman.

Dr. Trono was born in 1931 and was brought up in a barrio in Negros Occidental. His parents, both teachers, consider education as a fortune they could give to him that he could never lose. He was inspired to persevere in his education to be successful and transferred to Manila, and later on to Hawaii, to continue his studies. He was a working student since high school, and had scholarship grants to aid in his education. He was not satisfied in having a Bachelor’s degree so he strived to have advanced degrees; it was also to help fulfill his aspiration to contribute something to the academe. He is now a Professor Emeritus in the university, and is currently on his 47th year of service.

He is a Catholic who believes that religion gives a person guidance, but character and faith keep an individual strong and on the right path. His disciplinarian parents also helped forming his persona, keeping him grounded despite the success he has attained in life.

ACADEMIC AND PROFESSIONAL CAREER
Both his father and his mother were teachers. His father told him that he and his mother do not have anything for him to inherit but education. At a young age he earnestly sought after a place in the academe by continuously motivating himself to study. After finishing elementary, in 1946, he then migrated to Manila for his high school and college studies. He supported his high school studies by shining shoes and selling snacks and drinks during weekends. During his time, the UPCAT did not exist yet. His admission to the University of the Philippines Diliman was "automatic" thanks to his outstanding performance during his high school years in Rizal High School where he belonged to the top ten students to graduate in 1950. At the same year, he enrolled in UP Diliman and finished his Bachelor of Science in Botany in 1954.

He was then married with three kids. Still with his unquenched desire in getting into the academe, he pursued and earned his Masters Degree in Agricultural Botany in Gregorio Araneta University Foundation in Malabon, known today as De La Salle Araneta University, in 1961 while working there until 1962.

He got an opportunity to study abroad in the University of Hawaii through the East West Center Study Grant which he competed for with other honor students. Because the funding from this grant is only for two and a half years, he needed another one to sustain his stay in the university. However, because of the guidelines of American scholarships where it is said that he cannot have two federal scholarship grants, he was forced to let go of the Fullbright Scholarship Grant. He worked as a graduate teaching assistant to support the rest of his 5 year stay in the university. Through this he was able to finish his Ph.D. in Marine Botany in 1968.

He came back to the University of the Philippines and joined the Department of Botany as an assistant professor in 1967. During that time, Edgardo Gomez organized the Marine Science Center, known today as the Marine Science Institute.

For 47 years he is still working for the University of the Philippines as a Professor Emeritus of Marine Botany of the Marine Science Institute despite his retirement since 2000.

He is currently affiliated with Food and Agricultural Organization (FAO) Aquaculture Seaweed Research and Development.

“His extensive research and developmental studies covering the Central Visayas to the Western Mindanao, including Zamboanga, Sulu and Tawi-tawi provinces have gained economic importance to the development of the most important livelihood among the coastal population in the country. The culture of Eucheuma and/or Kappaphycus is now the most productive livelihood among the coastal populations. He was also the first to report the occurrence of “ice-ice” disease which causes the tremendous loss of biomass in seaweed farms.

His 40-year career (1968-2008) as a dedicated scientist in the field has spanned more than 25 locally and/or foreign funded research projects which resulted to the production of 170 scientific and technical publications consisting of nine chapters in books, 70 articles in journals, conferences and symposia proceedings, 81 local publications, and 10 international publications. The two-volume books entitled: “Field Guide and Atlas of the Seaweed Resources o the Philippines” are considered as the most authoritative books on the seaweed flora/resources of the country today. These publications cover the three broad areas of algal studies, mainly, biodiversity (taxonomy), biology/ecology and culture.

In addition to Eucheuma and Kappaphycus, Dr. Trono also researched and published papers on the open water and pond cultures of Gracilaria, pond and lagoon culture of Caulerpa lentillifera and culture and management of stocks of Sargassum.

Dr. Trono and his research team have just completed implementing a project entitled: “Assessment of the Seaweed Resources and Farming as Livelihood in the Balabac Marine Biodiversity Conversation corridor and the potential for Seaweed Farming Development of the Adjacent Areas”. Major outputs of the project are: Establishment of new farm demonstration modules, and the zoning of the farmable areas into family farms; training of farmer participants and recommendations on the practical interventions to resolve their farm ecology problems; detailed inventory of the seaweed species in selected study stations, the database on species abundance and distribution; and the changes in the biodiversity of the seaweed communities during the NE and SW monsoon season. A manuscript titled “The structure and diversity of seaweed communities in the Balabac Marine Biodiversity Conservation Corridor, southern Palawan” is presently being prepared for publication.

Dr. Trono has recently completed the implementation of a project entitled “Development of Culture Technology for Halymenia durvillaei Bory de Saint Vincent”. The important output of this project is the publication of a book titled “A primer on the land-based culture of Halymenia durvillaei”. This species of seaweed is a favorite and expensive ingredient in Japanese seaweed salads and a source of lambda-like carrageenan and the medically important and expensive red pigment, r-phycoerythrin.”

With the studies of Dr. Trono, he produced many publications in journals as scientific papers and as part of books. The following are the publications by Dr. Trono:

Apart from these contributions in the academic field, Dr. Gavino Trono was also able to help various coastal communities in Central Visayas and in Western Mindanao. Thanks to his researches, seaweed farming is now one of the most important livelihood in different coastal areas in the Philippines. Today, about a million of farmers and entrepreneur benefit from seaweed farming. He was also the first scientist to report the “ice-ice” disease in seaweeds. This disease is caused by microorganism characterized by slow growth and crystallization of the seaweed branches making it look like ice crystals.


RECOGNITION AND AWARDS
Dr. Gavino Trono has received awards for his research works and contributions in seaweed taxonomy, biology, ecology and mariculture:
MEDIA 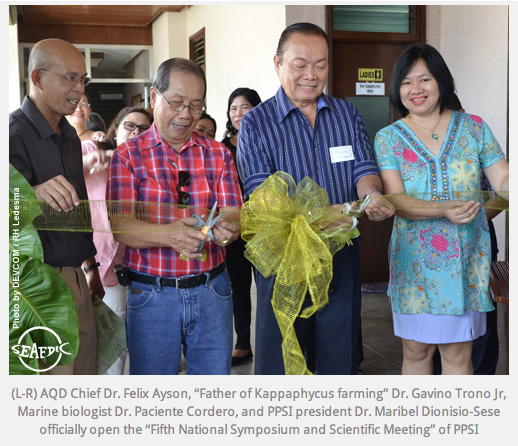 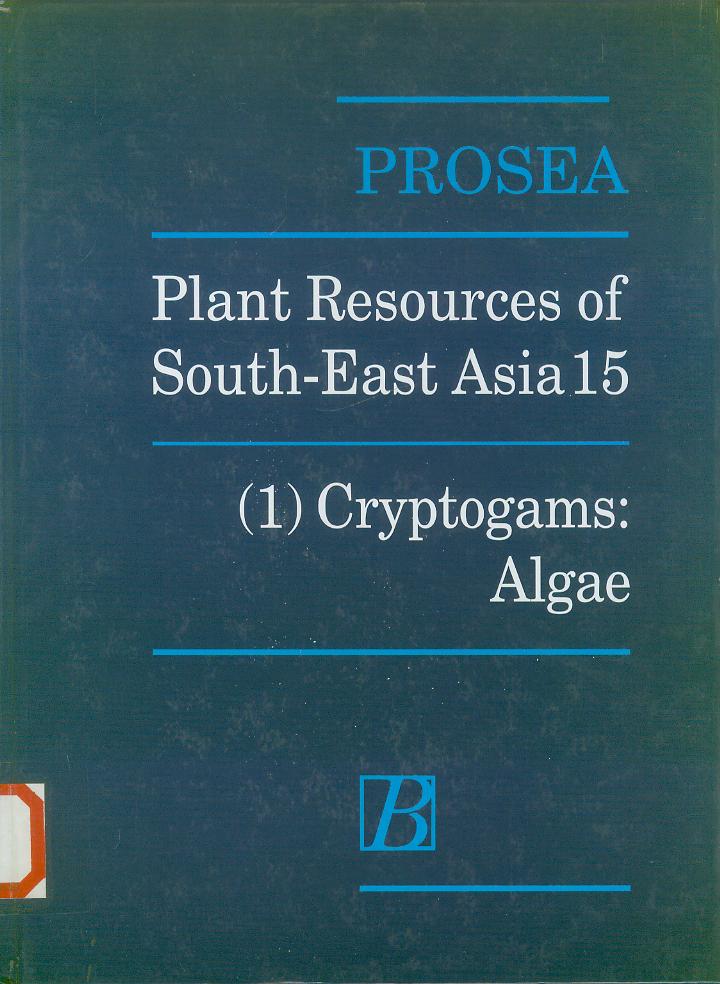 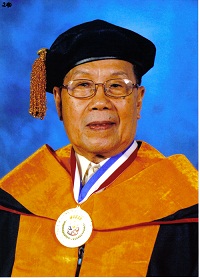 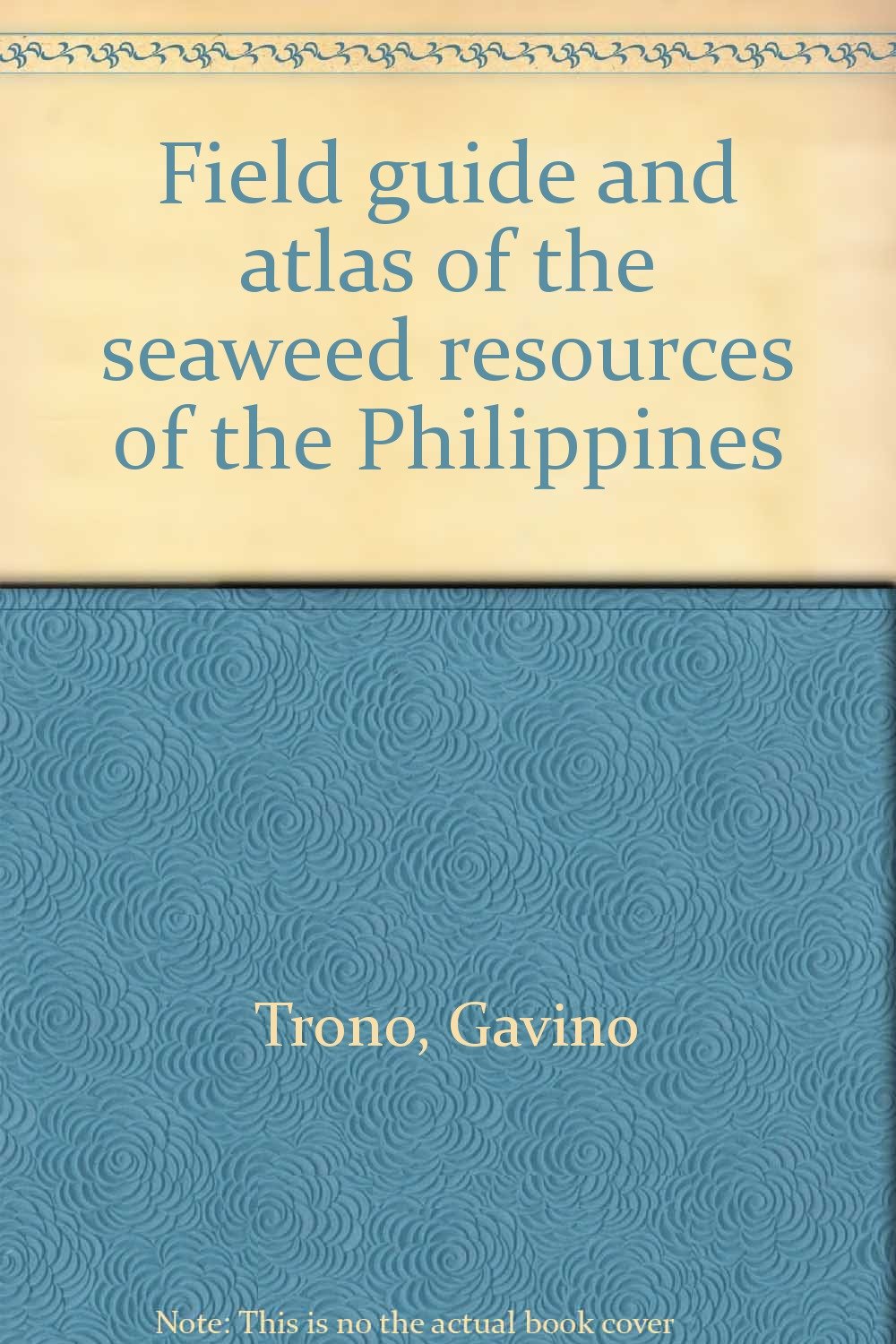 A Dyaryong Tagalog interview with Mr. Trono from YouTube:

A Video of the STS X2 Group 12 Interview with Mr. Trono:


The Audio recordings of the interview conducted by STS X2 Group 12:
https://www.dropbox.com/sh/e6tdypo26tkojuu/AAAZA81wDW3L2ozeEwo3XRsba