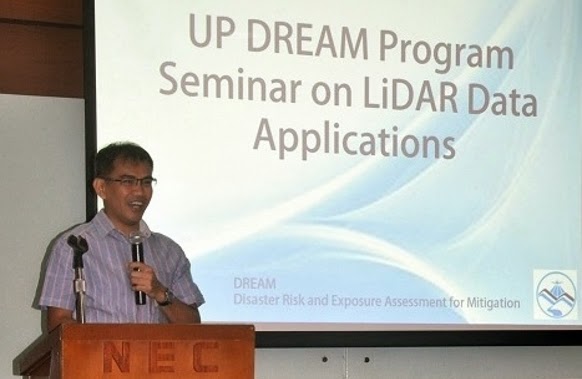 This paper will explore the life and works of recent influential scientist, Dr. Enrico Paringit. In particular, this paper will focus on four aspects: his personal life, his academic and professional career, his contributions, and any recognition and awards he may have received. A glimpse of his personal life will be given, specifically his background of having a geodetic engineering family and his love for discovery. For his academic and professional career, this paper will depict his beginnings as an environmental scientist during his PhD, his satisfaction and joy with teaching, to his more disaster-focused contributions under Project NOAH. For his contributions, this paper will focus on his recent award-winning work, the DREAM/LIGTAS^3 initiative. Overall, this paper will highlight the scientist’s love for discovery, adaptation to different situations, and combining science and technology to achieve a greater purpose, as seen through the life and works of Dr. Paringit.

Born in Pangasinan on the 15th of August 1975, Dr. Enrico C. Paringit is one of today’s leading geodetic engineers as he spearheads Project NOAH’s DREAM/LIGTAS^3 Initiative. The youngest of four siblings, he was born to public school teacher, Victoria, and fellow geodetic engineer, Esteban Paringit, Jr. While he may have initially followed in his father’s footsteps, Enrico claims that his father served more as an inspiration; that the only thing they had in common career-wise, was that both became geodetic engineers. Unlike the more rigid character of land surveying that his father specialized in (with its set governmental standards and operational purposes), Enrico preferred the excitement of new discovery and experimentation entailed with remote sensing. In that sense, while both Paringits took an interest in geodetic engineering, they differed in their specialization and application.

Today, Dr. Paringit lives with his wife, Maria Cecilia, and their two children (Francis and Erikah) in Tandang Sora, Quezon City. Like him, Mrs Paringit is also a geodetic engineer, but one that specializes in urban planning (i.e. real property, zone setting, etc.). One year older than his wife, Dr. Paringit met her while they were both taking up their engineering undergraduate degrees in the University of the Philippines, Diliman. While it is still too early to say for his young children, ages 5 and 7, Dr. Paringit does hope that at least one of them follows in their parents’ footsteps as geodetic engineers, or at least draws inspiration from either of them in that field.

His hobbies include running, diving (during his environmental scientist days), and swimming, depending on where he is given his busy schedule as head of Project DREAM. He enjoys travelling and different cultures, but still favours his home country above all. He has a gift for interference – seeing patterns and interpreting them (e.g. technological development or water flow systems) – that has helped with his career as a researcher and professor. Finally, he values science and technology working together; how technology would be useless without the knowledge of science and knowing how to apply them for practical purposes.

Dr. Paringit graduated from the University of the Philippines, Diliman with a degree in BS Geodetic Engineering and no particular honours in 1997. He participated in one student organisation (GE Club) and one fraternity (EMC2), but overall describes himself as an average student. Two years later, he graduated with a master’s degree in MS Remote Sensing before taking up a position as associate professor in Engineering at that same university. In 2003, he graduated from Tokyo Institute of Technology in Japan with a PhD in Engineering. He describes his doctoral years in Japan as one of the best in his life in terms of physical fitness and productivity as a researcher. In particular, the work he did for his PhD focused on coral reefs in Japan; specifically, how they get damaged by human activities. This was done via fieldwork, such as his visits to the coastal areas of Okinawa for coastal reef mapping, and lab or research work, such as assessing water quality via remote sensors (i.e. launching satellites that have signal transmitting camera sensors and comparing the scales or resolutions of the captured images). Together with the novelty of immersing himself in a new culture and his easy access to the most advanced technology, Dr. Paringit describes it as “the best of both worlds…parang turista, but you still do your job”.

Regarding his time as associate professor, (he hasn’t taught full-time in 2 years since he’s been occupied with Project DREAM) Dr. Paringit also considers his time teaching students as one of his happiest. Mostly teaching graduate courses, he doesn’t regard himself as a ‘terror prof’ and hasn’t received any comments of such from past students. He claims that at the start, he did have high expectations, but learned to adjust his style over the years by developing better techniques to put across ideas. For students, he prefers the active ones who can argue and support their own individual ideas. What he likes most about teaching is interacting with the students – both in the class and lab setting – and sharing the joy of discovery. That said, he values not only teaching an idea, but also training students to develop their own; in that sense, teaching them to teach themselves.

As for his time as head of Project DREAM/LIGTAS^3, he describes it as surreal. From one moment, he’ll be doing dangerous work with the most local of folks in the middle of a gushing river, the next he’ll be safely seated in a formal cabinet meeting with the highest of government officials. Nonetheless, he says he enjoys the work as he gets to learn more about the environment as well as the people involved. It’s the connections made each time these people come together as they try to solve a universal problem such as flooding and attempt to translate their ideas into something they can use. Travelling is also a perk of his job, sometimes visiting five cities in just two days (he had also just come from Bangkok the day before our interview and was leaving for Cagayan de Oro the day after). Of course, he claims there’s always that burden of being separated from his family, but at the same time, “you can never take the fieldwork out of the scientist”.

Comparing his two professions, he seems more inclined towards teaching but believes that it’s always best to teach from your own experiences. Thus, his research with Project DREAM/LIGTAS^3 would help enrich him as a teacher.

Every year, the Philippines experiences a number of earthquakes, typhoons, and flooding cases – so much so, that our country is filled with marks on a map of natural hazard risks. 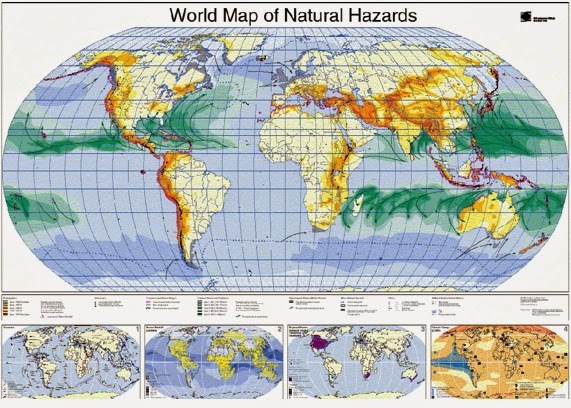 For Dr. Paringit, it was this unfair assessment, or the lack of differentiation between the levels of hazards our country experiences, that jumpstarted the idea of refining the data obtained. Likewise, he chose flooding cases as these, for him, were among the most frequent and most damaging of natural disasters for the country. In addition, he saw that flooding incidents would be a good case study for how proper development could be achieved (i.e. can’t develop economic structures if it’s always broken down by flooding). Thus, the ‘Disaster Risk Exposure Assessment Mitigation/LiDAR Integration for Geo-environmental Assessment for Safety, Security, and Sustainability’ or DREAM/LIGTAS^3 initiative was formed.
This program will make use of LiDAR (Light Detection and Ranging) and InSAR (Interferometric Synthetic Aperture Radar) technology as a means of flood mapping and 3D modeling. How it works is that the remote sensing technology (LiDAR) will be flown (via planes) over the area to be measured. Laser beams will then be emitted, striking an object or area, before being reflected back. The sensor technology then measures the time for reflection to be detected.

The data output would then essentially be a number of points (where the beams hit) depicting the topography (i.e. water flow, low-lying areas, most likely to get flooded). For this project, 17 rivers (over a third of the country’s total land area) all over the Philippines will be assessed. 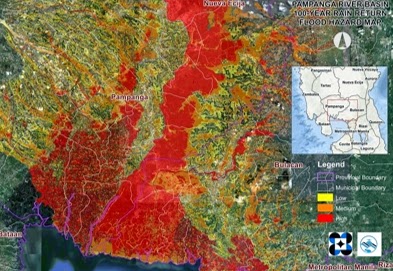 Dr. Paringit describes the project as having a more diagnostic approach by identifying the cause, prevention, and possible solutions to flooding. For example with Yolanda, they used the project to estimate the number of damaged houses for relocation solutions or to identify the most devastated areas for providing proper relief responses. In addition, he says that one major advantage of this project is that it develops local capacity. To be sure, the project is not really the first of its kind (the Australians had already done the same for Marikina River), but this is the first time it has ever been manned by local powers. Consequently, part of the program involves training Filipinos for the use and management of SAR technology. As for the project’s success, he finds that it has made a difference as seen from decreased casualties between Ondoy 2009 (464 dead, 529 injured, 37 missing) and Habagat 2012 (109 dead, 14 injured, 4 missing) and 2013 (27 dead, 30 injured, 4 missing). Nevertheless, the project is not perfect. For Dr. Paringit, he finds the post-disaster situations to be the hardest part when it comes to the program – knowing that something could have been done better to prevent certain scenarios. Take for example, the high death toll during Typhoon Yolanda and the question as to why the warning was not enough. This event highlighted for Dr. Paringit that it’s not just about the science involved that’s important, but also how you communicate it for effective application. 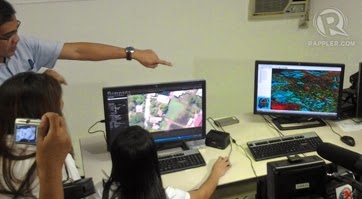 With that, Dr. Paringit leaves with this advice for future geodetic engineers and pioneering scientists: Don’t be afraid to try new things. Take calculated risks. Adapt some techniques, while developing your own.

“for having accomplished high-impact research in the fields of land surveying, remote sensing and geographic information system (RS-GIS), environmental monitoring, and disaster risk assessment and management, while at the same being able to significantly contribute in creating a research-friendly environment by including in his research projects the acquisition of state-of-the-art research equipments that could be used as well by fellow researchers, students and faculty members within and outside the DGE and Training Center for Applied Geodesy and Photogrammetry (TCAGP).” 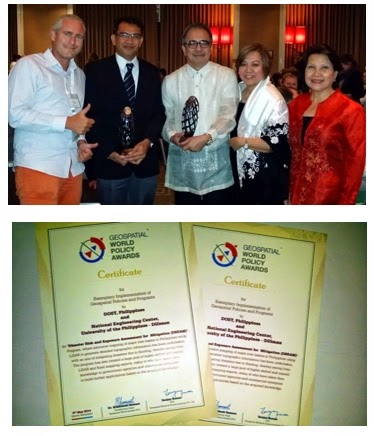